Smiles and shouting kids greeted us as we pulled into a remote village. The village is an hour and a half away from Siem Reap and the famous Angkor Wat temple. What were we doing so far away from the tourist track? I along with 30 others crammed into the back of a pickup truck to volunteer. 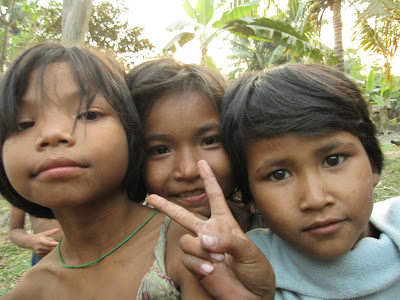 How did I find myself in this village? Well in September I met a couple from Japan in Croatia at the Plitvice Lakes. We talked and I learned of their project to build a school in Cambodia. We made plans to meet when I was in SE Asia so I could help as well. I spent 3 days with them in the village, working alongside a crew of about 30 Japanese.

There were so many kids in this village, maybe an attempt to rebuild the population after Pol Pots elimination of 20% of the people in Cambodia. 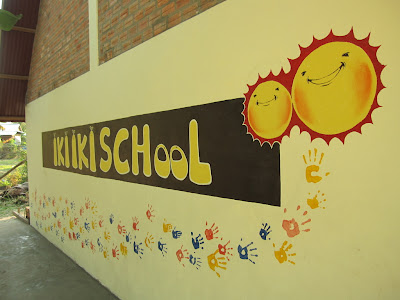 Working on the school and staying in the village allowed me to see and understand the culture in Cambodia. People were genuine and the children happy. During breaks I had the opportunity to enjoy the slide and swings, playing games with them. A cacophony of laughter and Khmer shouts.

The Iki Iki school was almost finished when I was there. Only some concrete work and painting to do. I almost missed the opportunity, so glad I made it and could be part of a community again.

There were points where it felt like Japan, surrounded by the language and so many people from all over that country I will visit soon. I realize I need to learn Japanese and soon.
time 9:23 PM

Hi Cris! hope u remember me, we met in Valencia at the very beginning of your trip, we spent a day at the malvarrosa beach. I'm keeping reading your diary and I hope u'll keep travelling because your journey is such a beautiful thing I don't know enough words in english to express!! good trip and good luck pirate!!
"What you can always have the wind in stern and that the sun is resplendent you in face and that the wind of the destiny brings yourself aloft to dance with the stars"
hugs
Benny